Intense conversation Residential Revolt with the Minister of Housing: “It is incomprehensible that the Minister is allowing rents to rise; tenants refuse the rent increase” 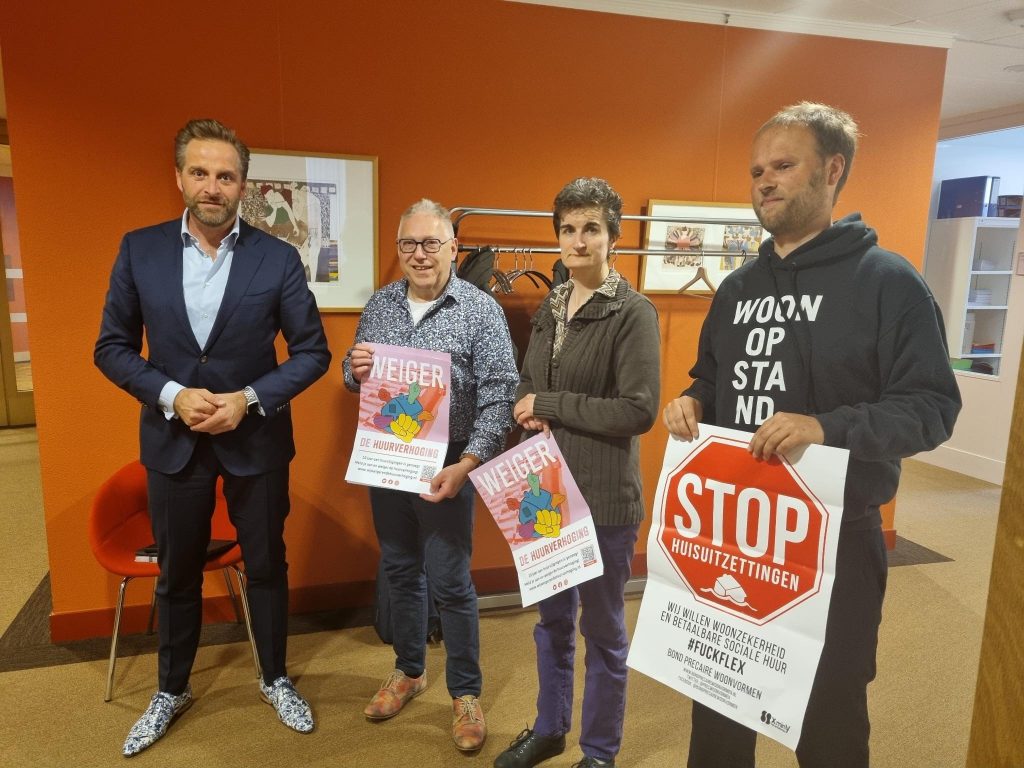 “Life is just very expensive, I don't want to take that away from it”, De Jonge replied to a cry for help from tenant Paulien who has to turn every penny. The minister is not prepared to freeze rents now, while more than 800,000 tenants do not have enough left over for living expenses after paying the rent. Residential uprising calls on tenants to massively refuse the rent increase as of 1 July.

The reason for the discussion between the national action coalition Woonopstand and tenants with the minister was the fire letter 'Stop the rental explosion', the Housing manifest and solutions to the housing crisis.

“Fixed charges, energy costs and other expenses are rising due to high inflation and I can hardly afford the rent anymore,” tenant Paulien Pfeiffer said in the conversation. She is one of the tenants, united in the action group We Refuse the Rent Increase, which will refuse the rent increase as of 1 July.

The minister promised to regulate rents in the free sector, but it is unclear how De Jonge wants to do this. In any case, the minister does not want to ban temporary leases, which now lead to great housing insecurity for many tenants. He did invite Residential Revolt to think about this. “But it shouldn't stop at talking. The right to housing cannot be realized a little. Something really has to change," says Abel Heijkamp of Woonopstand.

The conversation came a day after the launch of the minister's latest policy proposal, 'A home for everyone'. Spokespersons for Woonopstand express their concerns about the ambition to distribute 30 percent of social rent fairly among municipalities. “We are already seeing that small municipalities do not want that, it is unclear how the minister can enforce this. Larger municipalities such as Amsterdam and Rotterdam with more than 30 percent social rent may focus on additional construction in the middle segment, and at the same time the minister does not want to put a brake on the decrease in social rent through demolition and liberalization. This will have disastrous effects on the supply of social housing,” says Melissa Koutouzis of Woonprotest.

DEMO May 28: rent is too expensive

The housing movement continues to call for massive action against the housing crisis. Tenants united in action group 'We Refuse the Rent Increase'

To enforce the demand for rent freezing, a will be held in Amsterdam on Saturday 28 May protest organized against the rent explosion. The demonstration starts at 14:00 on the Hoogte Kadijk.

The following were present at the meeting with the minister: representatives of Woonopstand, Woonprotest, We Refuse the Rent Increase, Recht op de stad, Bond Precaire Woonvorm and two tenants.

We Refuse The Rent Increase is a non-partisan initiative of the Bond Precarious Housing (BPW)† On the website www.wijweigerendehuurspreis.nl There is a clear step-by-step plan for refusing the rent increase.

The reason for the conversation between Residential Revolt and Minister De Jonge was the fire letter 'Stop the rent explosion' that the national housing movement sent to the minister in February. In the conversation with the minister, the call was made for concrete and rapid measures to combat rent increases and housing insecurity. The letter formulated five requirements:

These measures must be part of a radically different public housing policy, as described in the Housing manifest† In October 2021, representatives of the housing movement presented the Housing Manifesto to De Jonge's predecessor Minister Ollongren (BZK).