Brandbrief: 'National performance agreements for the housing association sector do not solve the housing crisis.'

The National Performance Agreements on the social rental sector that are currently being drawn up are based on a further marginalization of the social rental sector. The agreements are not only insufficient to strengthen public housing, but even lead to further flexibilisation of rent and a worsening of the position of tenants. These agreements between the government, Aedes, VNG, IPO and the Woonbond will be finalized on 30 June. This should not happen! 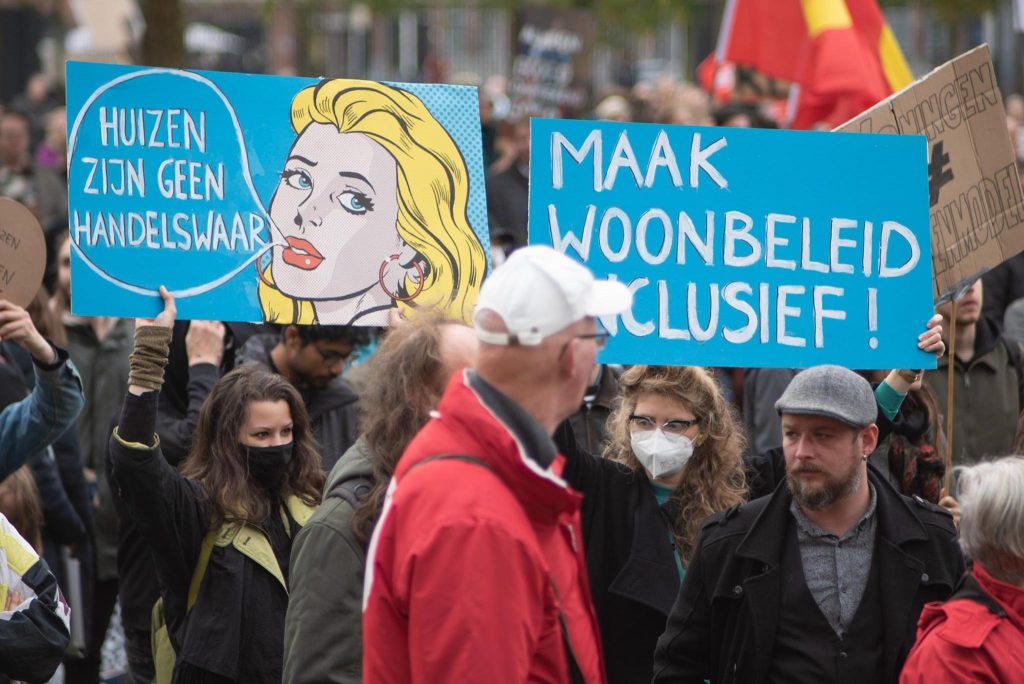 What is going on?
Woonopstand has been able to take cognizance of the content of the draft version of the performance agreements in various ways, which have not been made public by the minister. The National Performance Agreements are currently being drawn up for the first time: this was a condition for the abolition of the landlord levy as of 1 January 2023. Minister De Jonge (Public Housing and Spatial Planning) determines the performance agreements in consultation with Aedes (the umbrella association of housing corporations), the Association of Dutch Municipalities (VNG), the Interprovinciaal Overleg (IPO) and the Woonbond, national association for tenants. The intention is that these agreements will be signed on 30 June.

What does Residential Rebellion want?
In October 2021, Woonopstand, together with dozens of action groups and social organizations, drew up the Housing Manifesto with 10 requirements for housing policy aimed at realizing the right to housing. Although the demand that the landlord levy be abolished by the new cabinet has been granted, partly due to pressure from the Woonbond, much more is needed to solve the housing crisis.

Minister De Jonge often mentions that housing is a fundamental right. But that should not be optional. The housing crisis will not be solved without a radically different public housing policy. In the national performance agreements, investments are exchanged for a deterioration in housing security, affordability and control. The housing crisis does not come out of the blue, but is the result of years of deliberate policy to reduce and marginalize the social rental sector. The national performance agreements continue this trend.

Investment in public housing falls short
At least 4 billion euros per year must be invested in public housing from the government. Since the introduction of the landlord levy in 2013, social landlords, especially housing associations, have paid more than 13 billion euros in landlord levy. This has had an enormous impact on rents and new construction, renovation and sustainability have lagged behind. Because the social sector has been squeezed for so long, it is now necessary to catch up: extra investment must be made from the central government. We do not see that investment in the national performance agreements.

The aim to add only 100,000 social rental homes by 2030 is completely inadequate given the housing shortage, the enormous numbers of homeless people and house hunters, and the affordability crisis. It is incomprehensible that the performance agreements do not agree that there will be a stop to rent increases, evictions, the demolition, sale and liberalization of social housing.

In addition, a large part of the new construction consists of flex homes, which should ensure a “structural flexible shell” of 120,000 flex homes. This leads to further flexibilization of housing and normalizes housing insecurity.

Woonopstand has the impression that the four institutional parties (Aedes, VNG, IPO and the minister) have put the Woonbond, involved on behalf of the tenants and tenants' organisations, on the brink. Other groups of tenants, home seekers and the housing movement have been sidelined and time pressure has been created by the institutional parties, as a result of which tenants are unable to provide full input on the performance agreements.

Back to the negotiating table
These national performance agreements are bad for the future of tenants and public housing. They offer insufficient guarantees for solving the housing crisis and normalize temporary, insecure and too expensive housing. We call on the parties to return to the negotiating table and focus on the rights of tenants and home seekers. We demand full control and housing security for tenants.

Signed on behalf of

Would your organization also like to sign this fire letter? Then send an email to [email protected] or use the form below.

For more information, read our explanation and the Draft National Performance Agreements